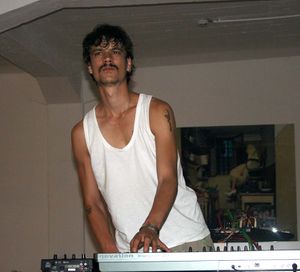 Philipp Quehenberger was born in Innsbruck in 1977, grew up in Tirol, Seattle (US) and Newcastle (GB). He discoverd his love for electronic music in the „his fathers“ studio and started playing the piano and fooling around with synthesizers. Played in local bands of various styles, ranging from Death-Metal to Rock. In 1994 he started performing alone, abusing his collection of toy instruments and wearing strange costumes. At the same time, the “Original Devil Duo“ with singer Otto “Horror“ Horrwatt and the first release appeared. After moving to Vienna Philipp Quehenberger kept his head above water with piano lessons, his old-fashioned equipment didn‘t keep him from recording a great album for Cheap Records.